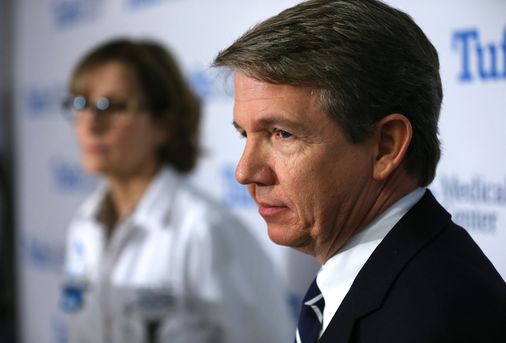 In recent months, leaders have asked the state to share a portion of its $1.13 billion American Rescue Plan Act funds to help fill staffing gaps and build new medical units. to increase supply. Instead, Care New England received $11 million in ARPA funds, in addition to the millions it received in other federal grants throughout the pandemic.

Get the Rhode Map

A weekday briefing from seasoned Rhode Island reporters, focused on the things that matter most about the Ocean State.

Raina Smith, spokesperson for Care New England, told The Globe on Thursday that Wagner would not be available to the media at this time.

This news comes five months after Dr. James E. Fanale, current President and CEO of Care New England, announced he was retiring. Fanale has led Rhode Island’s second-largest health care system, which has Women & Infants, Butler and Kent hospitals, since 2018. Her announcement came just weeks after Dr. Timothy Babineau, president and CEO of Lifespan Corp. down. Babineau will remain as a consultant at the request of the company’s board of directors. Lifespan is expected to announce its new CEO in December or January and owns Miriam, Hasbro Children’s, Newport, Bradley and Rhode Island hospitals.

Fanale’s last day at Care New England will be December 1.

In early July, Care New England’s board voted unanimously to remain independent and not merge with another entity. But for years, leaders have warned of financial challenges that would leave them “no choice” but to merge with another health system. Fanale had previously told the Globe that he believed a merger or acquisition of some type would be “necessary” for the financial future of the system.

Some state leaders, such as Speaker K. Joseph Shekarchi, a Warwick Democrat, have long said they would protect Kent Hospital from Care New England, which is the area’s general medical and surgical hospital. It is considered a “community hospital” and is the second largest hospital in the state. But according to the system’s financial reports, it is the Women & Infants Hospital that is most at risk.

The Women’s and Infants Hospital has 247 licensed beds, including 80 neonatal intensive care unit beds. It delivers more than 80% of babies born in the state, has Rhode Island’s only NICU and has a heavy Medicaid prevalence, Fanale recently told The Globe.

“It’s just a fact that we take care of everyone,” Fanale said in a July 2021 interview.

This is only one of the problems that Wagner will have to face.

Care New England’s board attempted to smooth its finances with a proposed merger that included Lifespan Corp. and Brown University. It would have been Rhode Island’s largest employer. But in February, Attorney General Peter Neronha and the Federal Trade Commission denied the merger, saying it would hurt consumers by creating a healthcare giant with a stranglehold on the local market.

Life and care New England had tried to combine before. In 2018, after one of those deals failed, Massachusetts-based Partners HealthCare (now Mass General Brigham) stepped in and attempted to acquire Care New England. They went up to submit an application to the state to seek the merger, but former Governor Gina Raimondo, who is now U.S. Secretary of Commerce under President Biden, stepped in and demanded an in-state solution. His solution faced backlash, and critics said having a system with 80% market power would be a prescription for disaster. Mass General pulled out of the deal so Lifespan and Care New England could return to the drawing board.

Some observers and political leaders have said Mass General Brigham, formerly known as Partners HealthCare, may be interested in striking another deal. Mass General and Care New England executives have previously declined to comment on such discussions. It’s unclear if Wagner will explore another deal.

As CEO of Tufts Medical, however, Wagner led a system that treated many low-income families and children who didn’t have the same kind of brand recognition and high payout rates as competitors like Mass General.

In 2014, Wagner said he feared Mass General was looking to take over South Shore Hospital and the Hallmark Health System. He and other competitors have explained how these kinds of deals would make Mass General, the state’s most dominant healthcare network, even more powerful. He brought together other executives from various local systems and launched a coalition that waged a public campaign to derail Mass General’s expansion plans. At the time, following widespread concerns about rising health care costs and declining competition, Mass General backed out of its plans.

Three years later, in 2017, he faced a confrontation with the Massachusetts Nurses Association, which staged a strike at Tufts. It was the first such strike in Boston in more than three decades. The union was planning a one-day strike, but the hospital planned to keep the nurses off for several days while using temporary replacement workers. As union nurses picketed his office, he told a Globe reporter at the time: “Somebody has to step up and say stand up to bullying, harassment and bullying. bullying of the deputy.”

But the union is also undergoing change: Jesse Martin, who previously led the SEIU branch in Connecticut, was recently appointed to replace Quinn.

Wagner is currently President and CEO of Tufts Medicine Professional Group and the Tufts Medical Center Physicians Organization. In 2019, Wagner was the interim CEO of Wellforce, which is now known as Tufts Medicine, where he led strategic growth initiatives. During Wagner’s tenure, Tufts Medical Center achieved “strong financial performance” and was recognized twice with a five-star rating in the annual Vizient Quality and Efficacy Evaluation (the University Health System Consortium), according to a press release from Care New England. It was the only academic medical center in New England to achieve this recognition. He attended Georgetown University School of Medicine and completed his internal medicine residency in Dartmouth, New Hampshire.

Outgoing CEO Fanale said Thursday that retiring when there is so much work to do is bittersweet.

“The time has come for me to pass the torch to someone well equipped to meet the challenges of operating a healthcare system of this magnitude,” Fanale said in a statement Thursday. “I will be forever grateful to those who have the same vision as me, and that is to always put patients first, no matter the circumstances.”