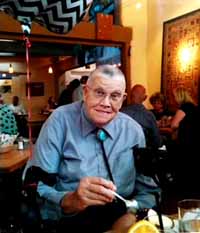 George Harris Anderson passed away peacefully at The Ridge Assisted Living on December 4, 2021.

George was born September 20, 1934 in Albert Lea, Minnesota to George Harris Anderson and Bella Wold Anderson. His early years were in Lake Mills and Pringhar, Iowa. Her father was a utility superintendent and her mother was a pharmacist.

In 7th grade, he moved to Hartley, Iowa. He graduated from high school in 1952 after playing alto clarinet in a marching band, performing in numerous plays, singing in the choir, glee club, and church choir.

He graduated from Drake University in Des Moines, Iowa with a degree in pharmacy, a profession he shared with his mother. It was while in college that he met and married Joann Schantz on August 24, 1956. Joann was also a student of Drake.

George held several pharmacy pharmacy positions before he and his young wife moved to Santa Fe, New Mexico in 1960. In 1963, George took a job as a pharmacist at Los Alamos Medical Center until 1969. In 1965 the family moved to Los Alamos. and in 1969 he bought Draggon Drugs, later known as Anderson Pharmacy. This is where he and Joann raised their two sons, Chris and Mark.

George’s generosity as a pharmacist has made such a difference to so many in the Los Alamos community. He not only served as a licensed pharmacist, but also guided the youngsters he saw at his pharmacy located across the street from Los Alamos High School. He was a legend who delivered medicine to those in need at all hours of the day and night, whenever needed.

If being a pharmacist wasn’t enough, he also ran the Topper Fountain/Anderson Grill, which was attached to the pharmacy. One of his typical days included walking to the Jukebox in the Grill, dropping into aqquarter, and playing “Take this job and shove it” by Johnny Paycheck and then return to the pharmacy to continue a day of work. A lot compared him to a junkyard dog whose bark was much worse than its bite. His bite simply took care of everyone he came across in life.

He was also a dedicated member and sang in the Bethlehem Choir Lutheran Church.

In August 2017, George moved to Assisted Living in Park City, Utah. He enjoyed going out, musical events and spending time with his family.

He is survived by his two sons; Chris (Kathy) from Park City, UT, Mark (Kathleen) of Madrid NM, her three grandchildren, Rachel, Sean and Matthew of Salt Lake City, UT, his sister Greta Fernald (Graham) of Seattle, WA, and her nieces and their families.

He is preceded in death by his beloved wife, Joann Schantz Anderson, his father, George Harris Anderson, Sr, mother Bella Wold Anderson, and many beloved four-legged ones friends.

A celebration of George’s life will be held at 10 a.m. Saturday, May 14 at Bethlehem Lutheran Church, 2390 N Road at Los Alamos, New Mexico.

In lieu of flowers, donations can be made to Bethlehem Lutheran Church, 390 N Road, Los Alamos, NM 87544.