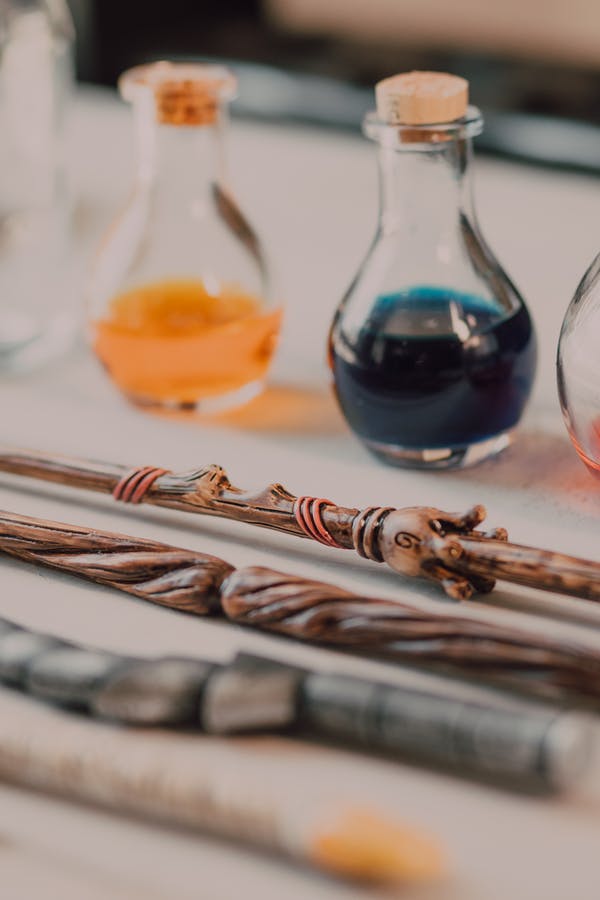 In the Harry Potter series, author JK Rowling shows us that medicine is magic.

A flick of the wrist and a flick of the wand can usually cure any ailment in the wizarding world of Harry Potter. Alternatively, a potion can do the same. In the Harry Potter series, author JK Rowling shows us that medicine is magic.

Many of the people, potions, and spell-naming conventions in the Harry Potter series are derived from (and used in) real-world conditions and pharmacological treatments. Even wizards and witches have brand name pharmaceuticals on their closet shelves.

Unknown to many, Harry Potter comes from a long line of druggist wizards, although he is a rather unique form of it.1

When Harry goes to Gringotts bank for the first time, he enters his safe to find a small fortune.1 JK Rowling credits Harry’s wealth to his 12th-century ancestor Linfred of Stinchocombe, the pharmaceutical magnate who developed Skele-gro and Pepperup Potion.1 Skele-gro is an ingestible potion that can repair or regrow a broken bone.

Harry’s grandfather then augmented Potter’s fortune with a pharmaceutical hair growth potion.1 With the wealth produced from the creation of this potion, we learn that even wizards lose their hair.

Throughout the series, plants seem to be common derivatives of potions and magical remedies. Several plants and herbal potions are based on real-world plants that have or may have, according to traditional western medicine, medicinal properties of their own.

For example, the mandrake was an important anthropomorphic plant in book 2 of the Harry Potter series. Its roots looked like human babies, and when pulled out of the ground, their cries of displeasure could kill the gardener. But when the mandrake matured, it became the star component of a potion to help “petrified” victims who were frozen in a coma.

Rowling based mandrake on an actual plant native to Greece and Northern Italy.2 It is believed to have been used as a hallucinogen and pain reliever in ancient times.2 Current pharmaceutical drugs like etoposide (Toposar; SP Pharmaceuticals LLC) use an alkaloid derived from the mandrake plant called podophyllotoxin, which is also the active ingredient in podofilox gel (Condylox; Elsevier Inc).3 Etoposide has been an effective treatment option for small cell lung cancer and testicular cancer, as well as for the treatment of other types of lymphomas and acute leukemias.3

But the plants of the wizarding world are not only used for medicinal purposes. For example, if a wizard got bored in his History of Magic (understandably) or Charms class, sprinkling sneeze powder on a friend’s robe, his friend would suddenly burst into a sneeze fit. , providing a reprieve from the boredom inflicted on young wizards. by a drawling professor.

This sneezing powder is also based on a real plant: the Virginia seahorse.4 Native to Virginia and parts of the Midwest, the flower head of autumn helenium can treat colds and headaches in powder form.3

Infusion of the flower head in a tea can also treat intestinal worms, with an infusion of the leaves also being used as a laxative.5 The most important are its possible cancer-fighting properties.6

In particular, the helenalin compound from sneeze may potentially be useful for tumor shrinkage.5 In previous research, scientists have investigated helenalin as a possible treatment for prostate cancer.6 Based on the results of the study, they found that helenalin triggered the inhibitor of reactive oxygen species, decreasing the rate of apoptosis of healthy cells and repressing the viability of concentrated prostate cancer cells.6

However, the helenalin plant can also be toxic if prepared in certain ways.5 Along with the potential risks, the scientists note that more research is needed to see if it provides viable therapeutic activity for prostate cancer.6

Sorcerers also cast healing spells, even the names of some spells evoke names common to us in modern medicine. For example, Remus Lupin throws a ferule comes out on Ron Weasley for splinting his injured leg in the third book.2 ferule is the Latin word for “stalk” and refers to the fennel plant.2 And in ancient Rome, fennel was used to make splints for wounds.2 Thus, the name of the spell emphasizes its physical purpose, but we can also see the correlation with real ancient medicinal practices.6

In the 21st century, fennel is a widely used supplement that supports the digestive system. It is also commonly found in natural pharmaceuticals to relieve upper respiratory tract infections, cholera, coughs and bronchitis.seven

The Vulnera Sanentur sort is a prime example of the power of a name. vulnerable, which is Latin for ‘wound’, and Sanentur, which is Latin for ‘cure’—this spell is used in the wizarding world to counter the curses of black magic.2.5 It’s not self-explanatory, but the naming convention of these spells may allude to today’s pharmaceutical naming conventions. Although Rowling can also allude to the magical power inherent in healing,2 a magic that exists in our world in the everyday medicine lining the walls of our pharmacies.