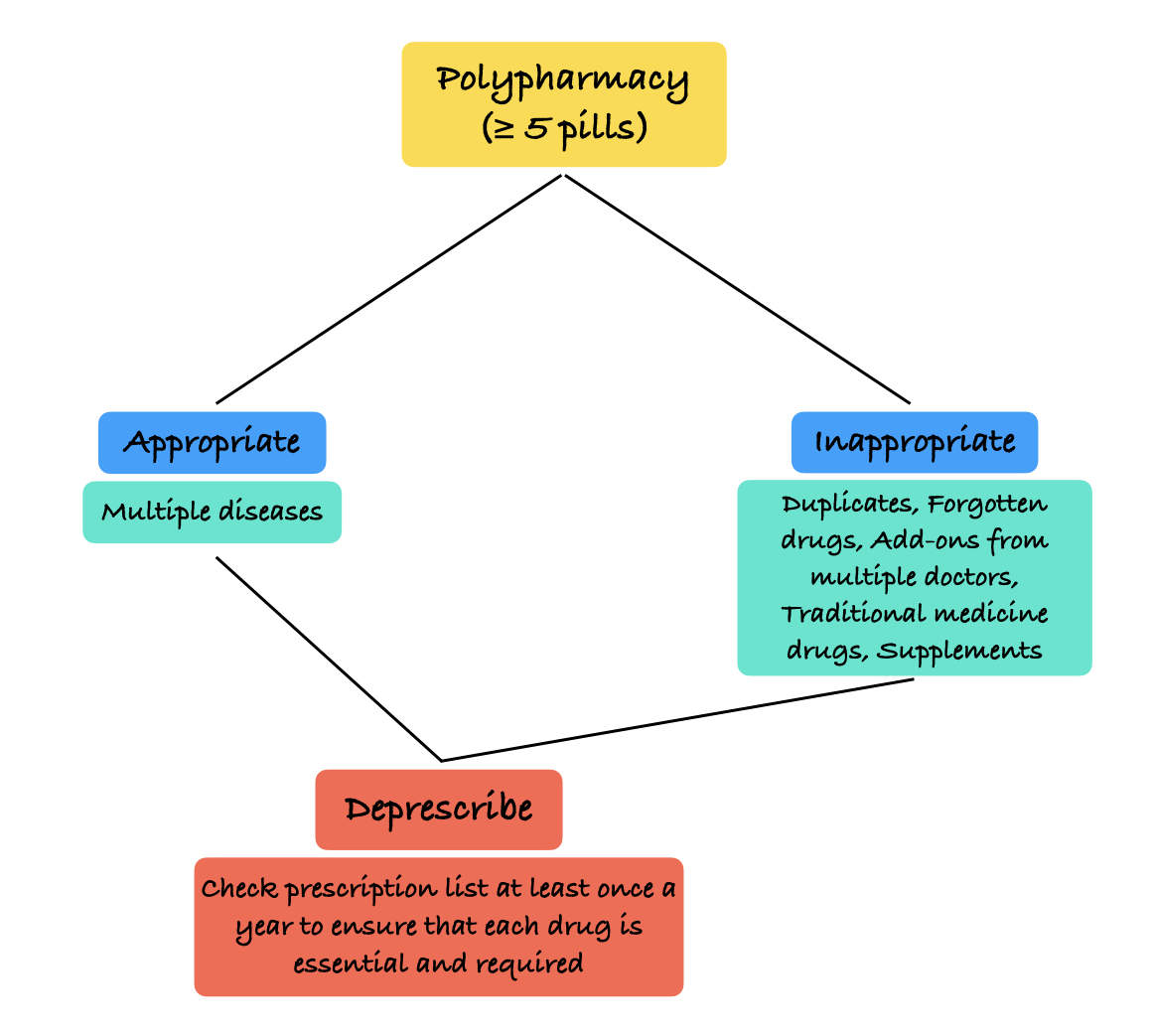 Recently a 65 year old friend of mine sent me a list of his daily medications. Until last week for a few years he was taking 9 pills a day including a statin, a few weight loss drugs, a sleeping pill, a multivitamin with zinc, an ayurvedic pill for constipation, metformin and a few others. with painkillers 3-4 times a week. Whenever he encountered a doctor who prescribed medication for one problem or another, he simply added them to his list, not bothering to stop or recheck what he was already taking. He had several episodes of hepatitis over the past two years, which were initially thought to be due to alcohol, but when the episodes continued even after he stopped drinking, doctors realized it was probably due to the drugs he was taking, at which point, he stopped all the meds…then started fewer new ones.

Anything that takes more than 5 drugs per day including Ayurveda and other traditional medicine drugs is called polypharmacy. [1]. Adverse drug events are a leading cause of death, tied with tuberculosis and malaria [2] and polypharmacy contributes to this by increasing the risk.

The pill and surgery are major pillars of modern medicine. One of the reasons why modern medicine is so successful is its ability to reduce all patients to a common base level, to assume that they are all the same, and to create drugs that can be prescribed to wide swathes of people. of people in the world in the same way. For example, regardless of the cause of the fever… each patient takes paracetamol to bring the fever down and if the fever does not come down within 3 days, takes antibiotic therapy (often self-prescribed), a strategy that often resolves the short-term problem, to hell with the long-term consequences. For many patients, modern medicine is like magic… take a pill or an injection and you recover instantly.

This is one of the reasons why a doctor who does not prescribe drugs or give injections is viewed with suspicion. During the second wave of Covid-19, doctors who prescribed a large number of drugs were more sought after than those who told you to stay at home and take only paracetamol and water. Also, some doctors who didn’t want to prescribe a long list of pills would end up doing it, because if they didn’t, the patient would just go to another doctor who was willing to prescribe those drugs. We still don’t know how many people suffered adverse effects from the battery of drugs they took, compared to Covid-19 itself.

Over time, as patients age and see a wide variety of doctors and surgeons for everything from diabetes to hypertension to an enlarged prostate, the number of pills a person takes begins to increase, with each medical specialist prescribing their own set of drugs. In India, an estimated 49% of people over the age of 60 [3] are victims of polymedication, 31% taking more than 10 drugs per day (hyperpolymedication). Potentially inappropriate drugs affect 28% of the population. These are huge numbers.

Some polypharmacy may be quite appropriate. For example, if the patient suffers from hypothyroidism, diabetes, hypertension, high LDL levels, parkinsonism and rheumatoid arthritis, he will end up with a list of more than 5 drugs.

Even then, a doctor or caregiver should comb through the list to ensure that each drug is prescribed only because it is absolutely essential and will not shorten the patient’s life expectancy or cause -even to harm, or if it does, is always in the patient’s best interest.

However, most polypharmacy is generally inappropriate; duplicate medications, forgotten medications (medications the patient forgot to stop taking), inappropriate medications, supplements of null or questionable value, traditional medicine tablets and powders of unknown ingredients from babas and fakirs, etc. Unless there is a family doctor or caregiver at home going through each pill and determining if it is needed or not, if it will interact negatively with others or not, the list just keeps going. lengthen with each new interaction with the doctor.
Polypharmacy leads to potentially inappropriate drug use, which in turn leads to reduced lifespan and increased mortality [4].

So what should you and me do?

If you or a loved one take more than 5 tablets of any type per day, including supplements (vitamins, minerals, omega-3s, etc.) and traditional Ayurvedic, Unani or similar medicines, you should review the entire list of prescriptions, preferably with the help of a doctor, to see what can be deprescribed. You can check out this calculator (https://globalrph.com/medcalcs/medication-appropriateness-index-calculator/) and go through the checklist for each medication you or a family member ingests, then ask your doctor about it. is really required or not.

Deprescribing is the process of reducing the number of drugs a person takes and is a treatment strategy that helps reduce the harms of multiple drugs, helping us live long, healthy lives. [5]. It’s best not to ask your doctor about every drug in an acute or emergency situation, but in a stable chronic environment, it’s worth having a conversation about deprescribing and reducing polypharmacy, especially if you or your relatives take more than 5 tablets a day.

The opinions expressed above are those of the author.

Online cash advance: what is it and what are the alternatives

Can you use expired medicines?