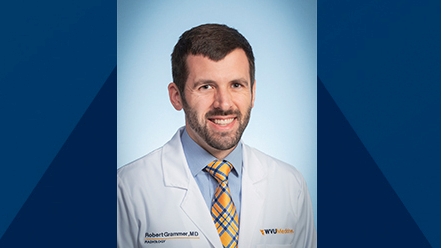 MORGANTOWN, W.Va. — Pulmonary embolisms — blood clots that lodge in an artery in the lung, blocking blood flow — can cause heart problems and lead to heart failure or cardiac arrest. The standard first line of care for pulmonary embolism is tissue plasminogen activator (TPA), a clot-busting drug, which helps the body break up and clear the clot so that blood flow to the lungs can be restored. For some massive pulmonary embolisms, TPA is not enough.

In cases where medication does not sufficiently remove the clot or the patient shows signs of cardiac decline, interventional radiologists must intervene to remove the clot. Traditionally, catheter-directed thrombolysis, which requires access to the pulmonary artery using a catheter inserted into the neck or groin, is used to deliver TPA directly to the clot.

Interventional radiologists at WVU Medicine have implemented a new device to rule out pulmonary embolisms in patients for whom TPA is unsuccessful or contraindicated or those experiencing cardiac decline requiring more immediate action. The Inari FlowTriever System allows interventional radiologists to access the pulmonary artery and remove the clot from the body with immediate results.

“Before the procedure, these patients can often barely finish a sentence, answering questions one word at a time because they cannot breathe fully,” said Robert Grammer, MD, interventional radiologist at WVU Medicine. “Because we can perform this procedure through a small incision and local anesthesia, we can see an immediate effect when the clot is removed. Most patients cough several times, then talk and tell us how much better they feel and how they came to the hospital that day.

Performing this procedure eliminates the need for open-heart surgery, which requires a large incision and a long recovery period.

Mike Malone, 62, of Oakland, Maryland, considers himself to be in excellent health and regularly cycles up to 60 miles, so when he suddenly felt extreme shortness of breath he knew it could be something serious.

“We had just returned from a trip to visit our son in Baltimore and all of a sudden I was extremely out of breath walking up our stairs,” Malone said. “It was like a switch. I went from having no problems to not being able to breathe, and my heart was racing.

That’s when he and his wife decided it was time to go to WVU Medicine JW Ruby Memorial Hospital, where doctors discovered he had a massive pulmonary embolism.

“I went to the hospital on a Sunday, got discharged Monday, and was back on my bike Friday because I had no pain with my incision,” Malone said.

“I’m not the type of person who goes to the doctor for every problem I have, but I’m glad I chose this. The doctors told me that a lot of embolism patients don’t make it to the hospital, so I’m glad I went when I did. I would tell anyone to go to the hospital immediately if they feel like they can’t breathe because I know it saved my life.

Patients who have had pulmonary embolisms need ongoing follow-up to watch for new clots so they can be treated before they become life-threatening.

Phil Remke, 68, of Moundsville, had just had triple bypass surgery when he felt like his recovery wasn’t going as it should. He had chest pains and shortness of breath. He felt like he had to go through it as part of his heart recovery, but soon his symptoms got worse. He knew something was wrong.

“I told my family that I was in trouble, that I couldn’t breathe,” Remke said. “We all thought it was because of the operation, and I had to get through it.”

He sent his wife to his women’s club meeting so she could take a break and decided to sit on the porch for some fresh air. When that didn’t help, he started to walk inside, but couldn’t catch his breath. He called his son, who lives down the street, to come help him.

“We had a disabled son who died 13 years ago, and I still had his home oxygen system. I asked my son to start it so I could use it,” Remke said. “I was able to catch my breath after using the oxygen.”

Remke has a history of pulmonary embolism, which was treated and monitored by her doctor.

“My daughter called a few days later and said God told her to check my EP,” Remke said. “Doctors had checked it before my surgery but haven’t since.”

He was scheduled for a routine follow-up visit with Walid Gharib, MD, an interventional cardiologist with the WVU Heart and Vascular Institute at WVU Medicine Reynolds Memorial Hospital, to monitor his pulmonary embolism in three weeks, but he knew he had to act sooner. He called the office and was able to get an appointment this afternoon.

Remke was transferred to WVU Medicine Wheeling Hospital to be transported by a NetworkHealth helicopter at JW Ruby Memorial Hospital. When he arrived, intensive care doctors and interventional radiologists reviewed his CT scan and determined that he needed immediate surgery to remove the clots.

He underwent a three and a half hour surgery, longer than average with this technique due to the complexity of his case, to remove the clots using the FlowTriever system. After the procedure, he was admitted to MICU for the night before moving to the Descent Unit the next day for further observation.

“I was sitting in the chair when my family arrived, and they were surprised that I looked so much better,” Remke said. “I told them I felt fantastic. The physiotherapist came later that day and asked me to walk a short distance to the wall and back. I told him I was going to do better than that, but I didn’t want any help. I walked the entire floor, only stopping once to tell him about the work I did in Moundsville.

Now Remke says he feels much better and is able to walk long distances without feeling out of breath. He says his general health has improved and his doctors allowed him to stop taking the majority of medications for his heart and other health issues.

“I’m grateful to God and to WVU Medicine in Morgantown,” Remke said. “I always told my family I was going to live to be 85, but now I feel like I could live to be 185.”

Is it safe to get mental health medication from an app?

Trump forgave him. Now a Georgia man is suing the state, the insurer for half a million.