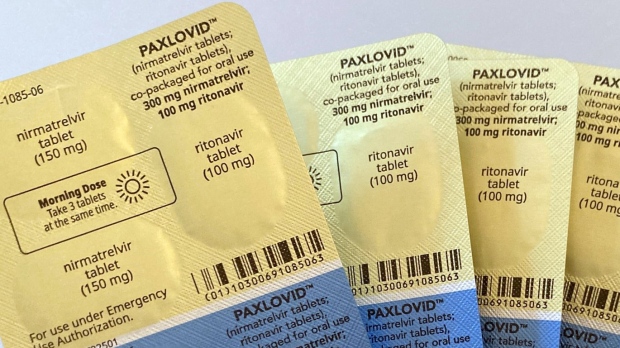 Chief Medical Officer of Health Dr Kieran Moore recently said the healthcare system will see a “triple threat” from COVID-19, a bad flu season and the resurgence of a childhood respiratory virus this fall and winter.

Finding ways to ensure greater availability of drugs to keep people with COVID-19 out of hospital is of particular importance for more rural communities, he said.

“I know the government is looking at the ability of pharmacists to be able to prescribe this directly after a positive test,” Moore said in an interview with The Canadian Press.

“There were concerns particularly in remote areas. Where you may not have good access to a primary care doctor, you may have access to a pharmacist. So that gap has been looked at and I think that they are actively working on this.”

Several medical officers in the province have raised the issue, Moore said.

“I think it’s a solution to increase access,” he said.

A spokesperson for Health Minister Sylvia Jones did not respond to multiple requests for comment.

Justin Bates, CEO of the Ontario Pharmacists Association, said his group is pushing for pharmacists in the province to be able to prescribe Paxlovid, as their colleagues in many other provinces already can.

“Given our experience with point-of-care testing, our knowledge of drugs – especially complex drugs like Paxlovid, where there are a lot of drug interactions – and more, I would say, a thorough consultation that is required together with patients, pharmacists are well placed to provide this turnkey solution,” he said.

Paxlovid is an antiviral medication taken by mouth within five days of the onset of symptoms.

It is recommended for people at high risk of complications from COVID-19, such as people over 70 and some immunocompromised people, especially those who have not received at least three doses of the vaccine. It can be prescribed by a primary care provider or at a COVID-19 clinical assessment center.

Having pharmacies as one more route for prescriptions will allow faster access and therefore prevent more people from being hospitalized this winter, Bates said.

“The earlier you started in five days, the better in terms of preventing symptoms and serious illnesses, which would then require you to go to the hospital or, even worse, to the intensive care unit of the hospital” , did he declare.

“The amount of volume going through stores, anecdotally, is very low,” he said.

Moore said about 3,500 treatments of Paxlovid are currently being prescribed each week, noting that demand appears to be increasing as COVID-19 activity increases.

Ontario has already announced that starting Jan. 1, it will expand pharmacists’ prescribing powers to include drugs for minor ailments such as conjunctivitis, dermatitis and hemorrhoids.

If the government expands powers further to include not just Paxlovid but all antiviral drugs, pharmacists could also prescribe Tamiflu – which has fewer drug interactions than Paxlovid – before what is expected to be a bad flu season, Bates said.

Dr. Zain Chagla, an infectious disease specialist at St. Joseph’s Healthcare in Hamilton, said he thought it was a great idea for pharmacists to prescribe Paxlovid, saying it could save people from being hospitalized with COVID- 19.

“These are preventable health care outcomes,” he said.

“There really needs to be more of an effort to make it more accessible and pharmacies have done an amazing job helping with COVID vaccines… The major issue with Paxlovid is drug interactions and therefore, having pharmacists who prescribe it makes perfect sense”